In late 2017, a man driving along a quiet section of Interstate 70, in Colorado, was unexpectedly pulled over by a State Trooper for a minor traffic infraction. As the officer approached the driver’s side window he claimed to have detected a strong marijuana odour coming from the trunk of the vehicle.

After conducting his search, the officer discovered, among other incriminating evidence, a couple of duffle bags filled with over 50 pounds of dried cannabis.

Things did not look good for the driver.

It is important to note that this cannabis was found in double vacuum sealed bags, a popular packaging method used for concealing strong odours.

Given the fact that the defendant was essentially caught red-handed, his lawyers needed a creative strategy to fight the charges. Their solution was to challenge the vehicle search itself. They claimed it was unwarranted since it was virtually impossible to smell marijuana packaged the way it was.

To prove this assertion, the lawyers hired a pair of research scientists, specializing in odour and chemistry, to conduct a study.

The scientists, Avery N. Gilbert and Joseph A. DiVerdi, were given permission to conduct experiments testing the air, inside the actual duffle bag, for concentrations of terpenes. Terpenes, of course, are the organic compounds responsible for a plant’s aroma.

They tested the interior of the duffle bag both when it was full of cannabis, packaged in double vacuum sealed bags, and when it was empty.

The results supported the defence’s argument; when cannabis is packaged in double vacuum sealed bags the terpene levels are much too low to be detectable by the human nose.

In the end, the case did not go to trial so the results were never made public. Interestingly enough, this experience did prompt the two scientists to conduct a formal study to investigate this phenomenon further. Their findings can be found in the March 2020 issue of Science & Justice.

For this study Gilbert and DiVerdi designed a simple experiment to test people’s ability to smell marijuana packaged in a variety of commonly used containers.  Participants were given a forced paired choice; they were instructed to smell two packages and decide which one contained marijuana.

As expected, participants easily detected the cannabis odour when it was packaged in Ziploc sandwich bags and less so when packaged in more durable plastic “pop top” containers.

When asked to smell the marijuana packaged in double vacuum sealed bags, on the other hand, participants were less confident in their drug sniffing abilities. The results showed that participants were correctly identifying the package containing cannabis just 50% of the time; which is essentially just guessing. Thus proving their premise that the human nose is incapable of discerning cannabis’ strong odours, unequivocally, when packaged in double vacuum sealed bags.

Which brings us back to that fateful day in Colorado, on the side of that quiet stretch of highway, where it now seems very unlikely that the officer had smelled any marijuana at all when approaching that driver’s car.

Given the difficulty participants had identifying cannabis odours in a controlled test environment, it seems quite improbable that the officer would’ve been able to pick up a scent from outside of the vehicle.

It’s more likely the officer’s statement was simply used as an excuse to conduct a search of the vehicle. This is commonly referred to as the plain smell doctrine which is a derivative of the plain view doctrine.

As one can guess, these doctrines give police officers permission to conduct a search if they see or smell suspicious evidence or contraband on or near a suspect.

Although plain view has long been accepted as justification for conducting a search in both the United States and Canada, plain smell is used cautiously as smell is perceived to be a much more subjective sense compared to sight.

Canadian courts are of the opinion that plain smell, in itself, does not amount to reasonable and probable grounds for a search.¹

But I digress, as this subject has become somewhat of a moot point ever since cannabis was legalized in Canada, in late 2018. Although we still have a 30 gram limit on individual possession and travel within Canada the majority of cannabis consumers seldom carry large enough amounts to necessitate vacuum sealing the product.

Just to be clear though, I am not suggesting or condoning the use of vacuum seal bags for concealing contraband from law enforcement. I am simply trying to highlight the bag’s ability to keep even the strongest odours at bay. 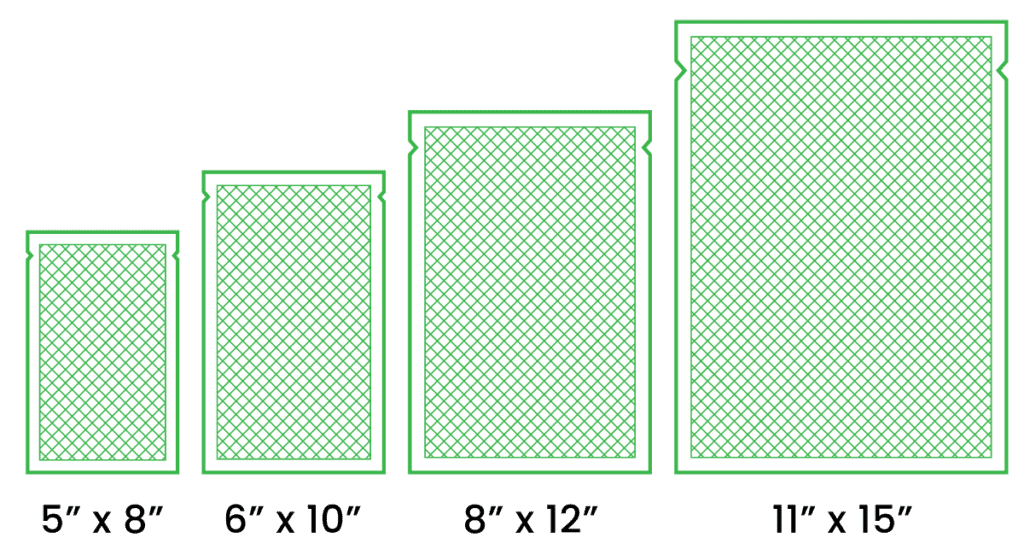 It’s for this reason, we at Dispensary Supply Canada, suggest vacuum sealing dried cannabis to help eliminate odours escaping one’s facilities. One can only imagine the intense aromas emanating from larger scale operations.

Now, of course, these facilities are required to be equipped with some type of odour control technology, which include: carbon filtration systems (arguably the most effective), negative ion generators/electrostatic precipitators, air scrubbers, masking agents, and even the use of negative pressure to keep odours within the facility.²

Unfortunately, some facilities still encounter complaints from nearby residents about persistent cannabis odours, even after installing costly air filtration and ventilation systems.

Incorporating vacuum seal bags in your odour mitigation strategies can prove to be an effective and economical solution to this pesky problem.

Dispensary Supply Canada stocks pre-cut bags and rolls in a variety of sizes to meet all your vacuum sealing needs.

¹ Khasam, Olivia. “It’s Right Under Your Nose! The Trial of the Senses and the “Plain Smell” Doctrine.” Centre for Sensory Studies, https://centreforsensorystudies.org/occasional-papers/its-right-under-your-nose-the-trial-of-the-senses-and-the-plain-smell-doctrine/. 23 April 2014.